Throughout a career spanning 30 years, Geoffrey Zakarian has made his mark as a chef restaurateur known for his sophisticated taste and signature style. An accomplished chef, host and culinary consultant, Zakarian has presided over some of the country’s top kitchens, traveling the world for new inspiration to marry with his classical training and techniques in a lifelong effort to deliver paramount hospitality experiences.

Zakarian's rise to culinary prominence began at Le Cirque, where he first worked in a professional kitchen. In five years, he worked his way up from Pastry Sous to Chef to Chef de Cuisine under Chef Alain Sailhac. During these formative years, Zakarian staged at places such as Arpège and Au Quai des Ormes in Paris, Aubèrge de l’Ill in Alsace, The Dorchester in London, Le Chantecler with Jacques Maximin in Nice, and Pierre Orsay in Lyon. In 1987, Zakarian took his first turn as Executive Chef at the legendary 21Club. In 1988, he became the Executive Chef of 44 at the Royalton Hotel, before opening the Blue Door at the Delano Hotel in Miami in 1995. In 1997, Zakarian became Executive Chef of Patroon.

In 2001, Zakarian opened his first restaurant, Town, to which he brought his culinary and decorative vision to life. Both Patroon and Town were awarded Three Stars from The New York Times. Zakarian next opened Country, a restaurant that paired his passion for food and wine with his innate sense of hospitality, grace and old world elegance. Country was awarded a Michelin Star along with Three Stars from the The New York Times. In 2007, Zakarian signed on to conceptualize and oversee the entire food and beverage program at The Water Club at Borgata, in Atlantic City.

In the Fall of 2010, Zakarian opened both The Lambs Club, at The Chatwal Hotel, reimagining midtown Manhattan dining, and The National, at The Benjamin Hotel in New York City, putting the beloved Ugly Burger on the map. In June 2011, Zakarian returned to Florida to open Tudor House at Dream South Beach, a neighborhood Gastro-Cafe rated as 2012's Best Hotel Restaurant in Miami.

In May 2013, Zakarian partnered with Norwegian Cruise Lines in a three-restaurant deal aboard their vessels, Norwegian Breakaway and Norwegian Getaway and that same year, Zakarian was brought on by the iconic Plaza Hotel to redesign and reconceptulaize The Palm Court.

In February 2017, Zakarian launched one of his most exciting projects yet, Point Royal at The Diplomat Beach Resort in Hollywood, FL, a Coastal American restaurant complete with an impressive raw bar, along with a cheeky quick-serve coffee and juice bar called Counter Point that anchors the hotel lobby.

In June of 2018, Zakarian redesigned the food and beverage program for the legendary MacArthur Place Resort and Spa located in the heart of wine country in Sonoma, CA. The project included Layla, the signature Mediterranean restaurant, The Porch, a relaxed coffee bar and marketplace, and The Bar at MacArthur Place, delivering craft beer and classic cocktails.

Outside of the kitchen, Zakarian is an accomplished author, philanthropist, entrepreneur, and notable television personality. In 2006, Clarkson Potter published his debut book, Geoffrey Zakarian’s Town / Country, which was named Editor’s Choice by The New York Times Book Review and was celebrated as " …one of the best cookbooks of 2006." His second cookbook, My Perfect Pantry: 150 Easy Recipes from 50 Essential Ingredients hit shelves on October 7, 2014. The third book, The Family That Cooks Together, published by James Patterson, debuted on October 6, 2020 and quickly became a #1 national best seller. Written by Zakarian’s daughters, Madeline and Anna use their experience growing up with a professional chef for a dad to bring some of their favorite recipes to the world.

Since 2014, Zakarian has served as Chairman of the City Harvest Food Council, a food rescue organization dedicated to fighting hunger in New York City. In 2016, with his wife Margaret, President of Zakarian Hospitality, they launched a line of kitchen products called Zakarian Pro For Home. The innovative line applies professional kitchen expertise to over 100 tools and cookware items for home kitchens. Also in the retail arena, Zakarian has a line of food products, Zakarian Collection, that offer premier ingredients and distinct flavors to the home cook. The products and food items are available both online and in stores across the U.S.

In addition to his status as a longtime favorite judge on Food Network’s Chopped, and as an Iron Chef, Zakarian is a co-host on Food Network’s Emmy-nominated daytime series, The Kitchen, which premiered in January 2014. In 2017, Zakarian formed Corner Table Entertainment, a multi-media production company, with media executive Jaret Keller. The emerging company has created Big Restaurant Bet, a new Food Network TV show, iHeartMedia’s Four Courses podcast, Fox’s The Great American Foodathon and a documentary focused on the restaurant industry during the global pandemic.

Fashion, design, media, and the arts are also valuable sources of inspiration for the chef. "Food goes through similar style cycles and redefinitions as in these other industries. You need to know that landscape to understand how to achieve something timeless." He credits his staying power with this quest for timelessness and an enduring love of restaurants. "I still dream of a small restaurant I visited in Provence decades ago that taught me the balance of simple flavors and the art of heartfelt hospitality," he said. As his portfolio of projects continues to grow, everything that bears Zakarian’s name reflects his unwavering commitment to authenticity, design, quality, and his lifelong passion for la belle vie. 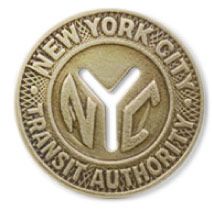 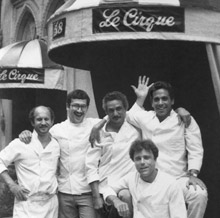 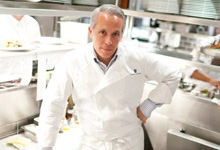 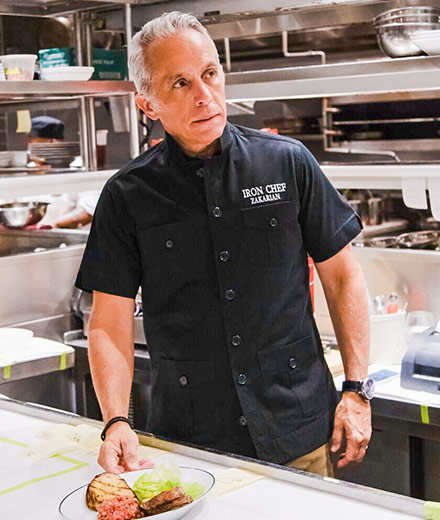 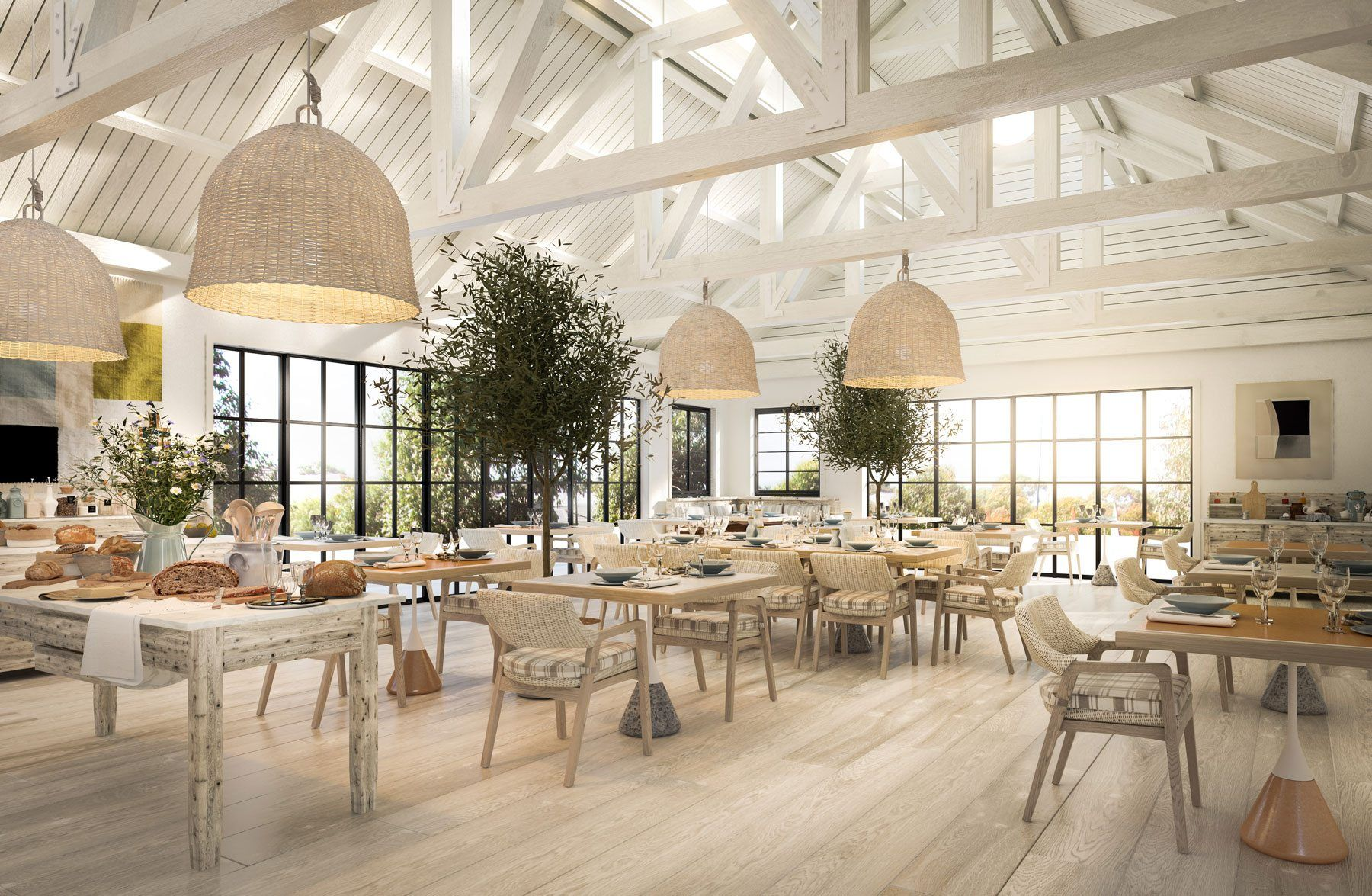 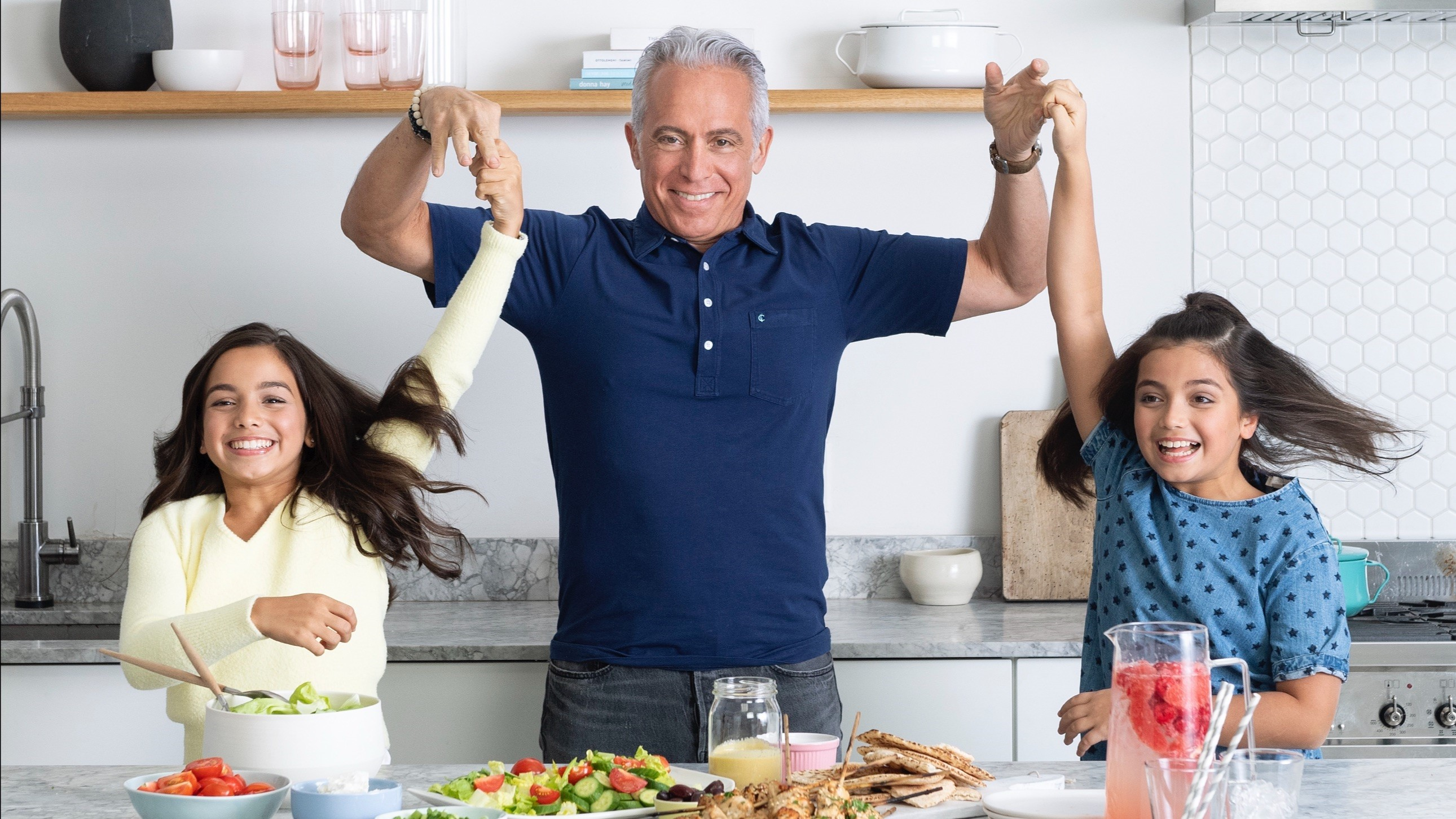 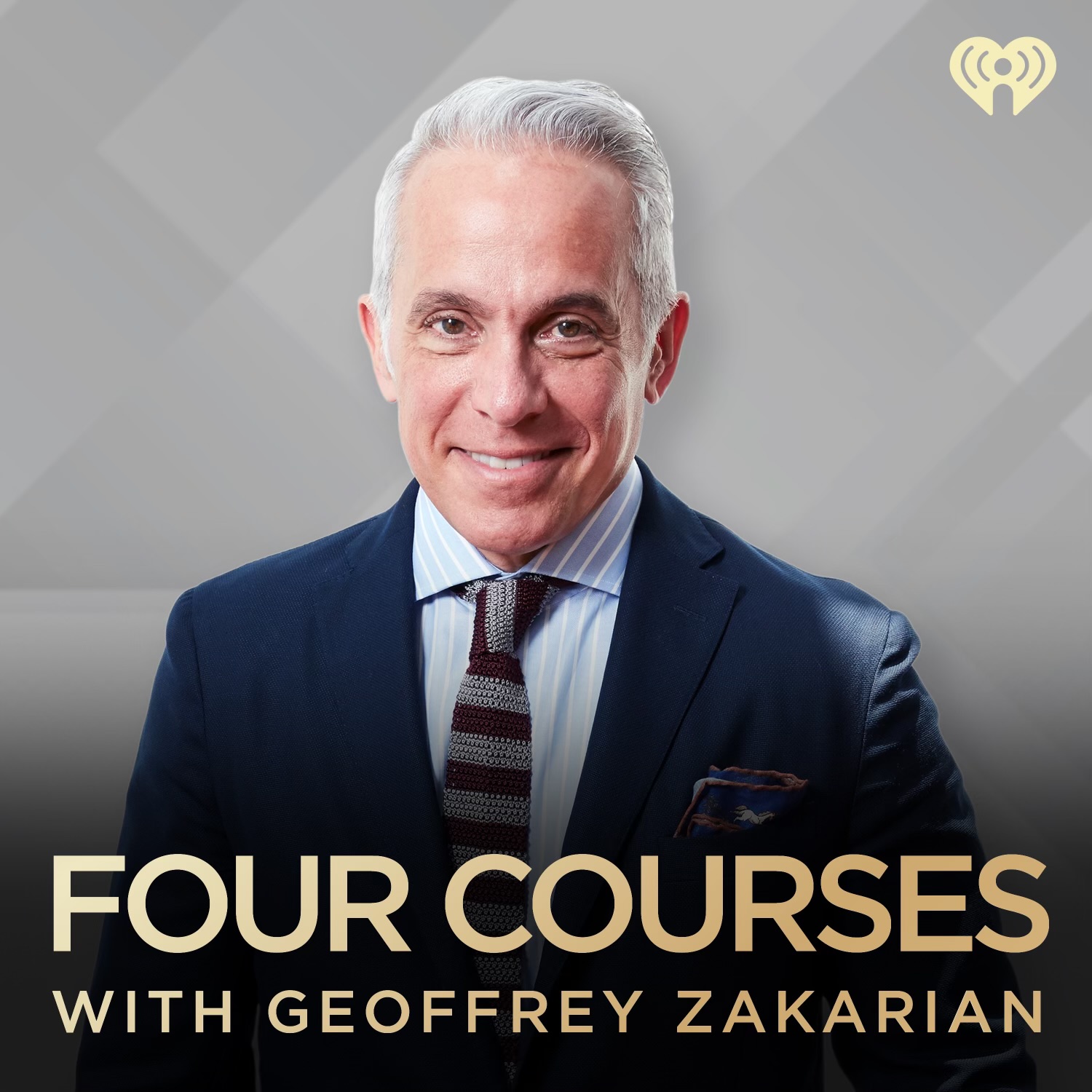 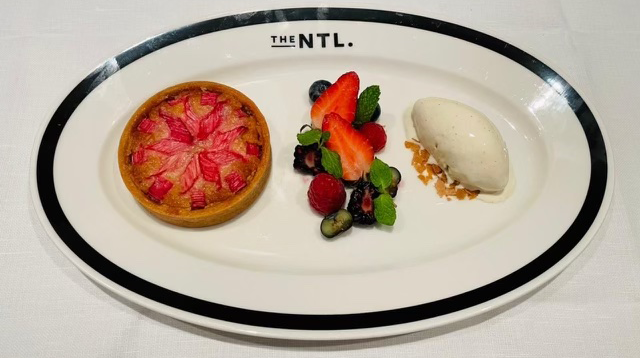 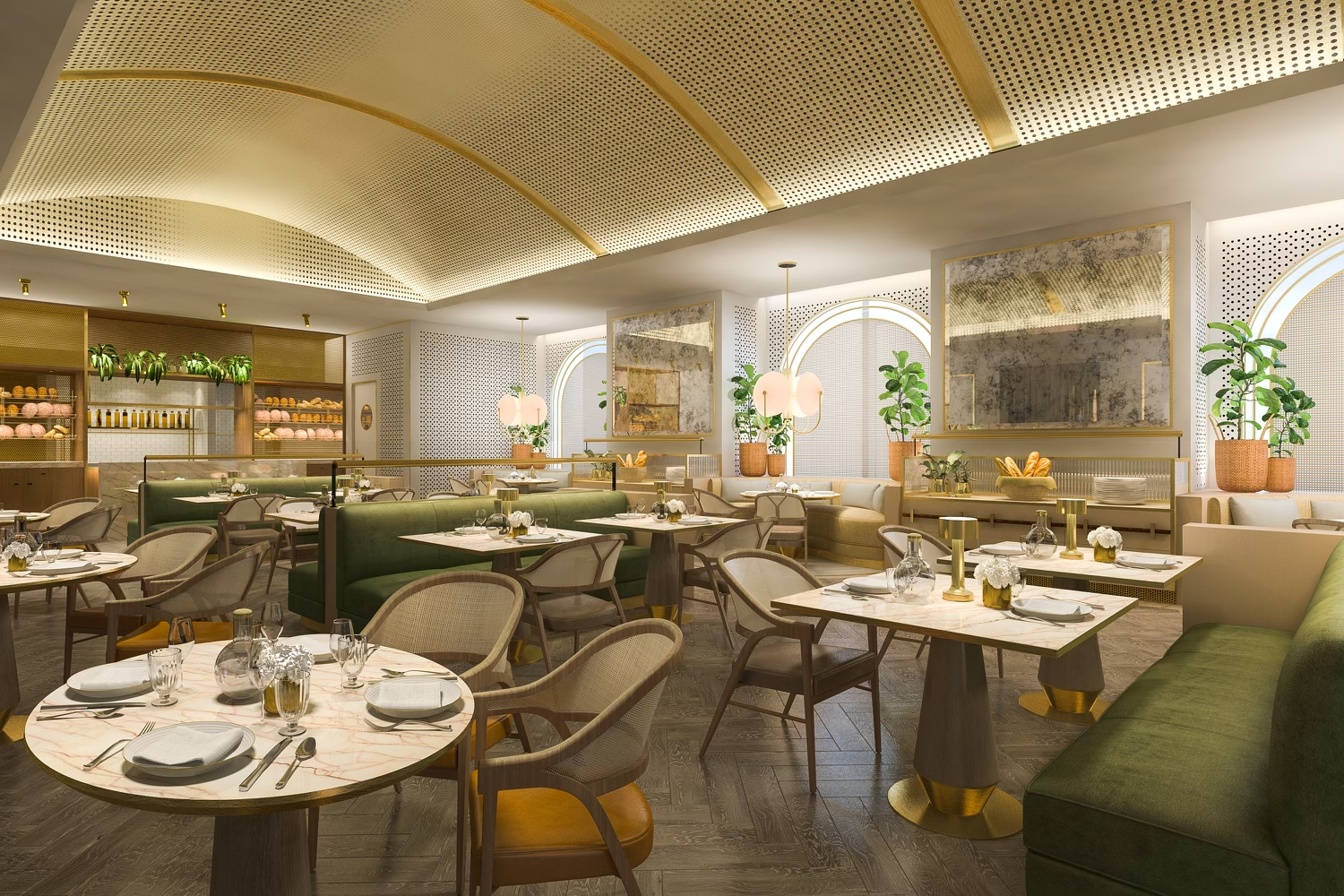 Graduates from The Culinary Institute of America.
Begins Career at Le Cirque. Develops technical foundation under French master chef Alain Sailhac.
Rises to first Executive Chef position at the legendary “21” Club.
Hired by hotel impresario Jeffrey Chodorow to be Executive Chef of 44 at the Royalton Hotel. 44 becomes an icon of 80’s chic and heralds a new era of glamor in hotel restaurants.
Opens the Blue Door at The Delano Hotel, Miami, one of South Beach’s first boutique hotels. Blue Door becomes an instant hit and a symbol of South Beach’s late 90’s revitalization.
Executive Chef at Patroon, NY. Awarded Three Stars by The New York Times.
Opens first restaurant, TOWN, to critical acclaim and a Three Star review by The New York Times.
Opens Country. Awarded Three Stars by New York Times, making Geoffrey the first NY chef to receive 3 straight Three Star reviews.
Debut book, Town/Country published by Clarkson Potter. Earns "Editor’s Choice" and is described as "one of the best of the year" by New York Times food editor Amanda Hesser.
Opens third restaurant, The Lambs Club at the Chatwal Hotel in New York. Described in The New York Times as "an amazing collection of flavors and textures that is worth traveling some distance to try."
Opens The National at The Benjamin Hotel in New York. Named to the "Sifty 50"; New York Times food critic Sam Sifton’s list of top restaurants.
Opens Tudor House in Miami. "Chef Zakarian’s fare is exceptional" raves Miami’s The Sun Post. Awarded 3.5 stars by the Miami Herald.
Wins the 4th season of Food Network’s The Next Iron Chef, Super Chefs to become the newest Iron Chef to battle in Kitchen Stadium.
Launches Ocean Blue, The Raw Bar and Ocean Blue on the Waterfront on Norwegian Breakaway, the largest luxury vessel to port in New York City.
Assumes Role as Chairman of the food rescue organization City Harvest to lead its Food Council in fighting hunger in NYC.
Relaunches the iconic Palm Court in The Plaza Hotel in another successful partnership with renowned architect Thierry Despont.
Becomes co-host of The Kitchen, Food Network’s long running Emmy-nominated daytime food talk show.
Debuts Pro For Home, his line of kitchen products, with Sur La Table
Zakarian opened two new concepts, Point Royal and Counter Point, within The Diplomat Beach Resort in Hollywood, FL.
Unprecedented 5 minute sell out of the launch of Pro For Home non-stick cast iron cookware on QVC
Redesigns the food and beverage program at the legendary MacArthur Place Resort and Spa in Sonoma, CA.
Zakarian Pro For Home products and food collection expand to over 100 items.
The Family The Cooks Together, written by the Zakarian Sisters, debuts and becomes a #1 National Best Seller.
Hosts Fox’s The Great American Foodathon to raise money for families in need during the global pandemic.
Debuts Four Courses with Geoffrey Zakarian podcast with iHeartMedia.
Screens the documentary Turning Tables: Cooking, Serving, and Surviving in a Global Pandemic at the Tribeca Film Festival.
Opens The National by Geoffrey Zakarian, a pop-restaurant at Dubai World Expo, UAE
Will open Geoffrey Zakarian restaurant in the new Waldorf Astoria hotel in Doha, Qatar